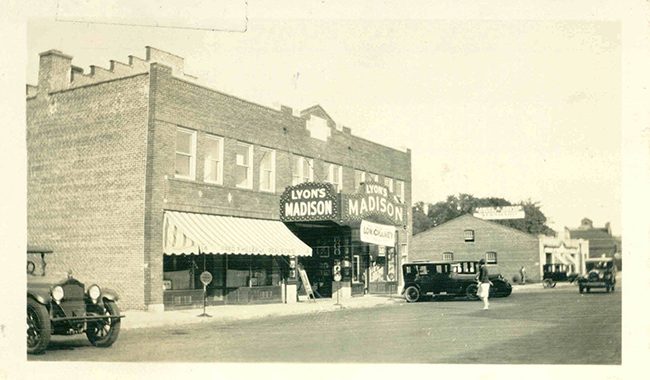 Work on the theater started in 1924, back in the days of silent films. When the theater opened in 1925 it featured a Morton Organ from California. An Organist would play along with the films in the large single screen theater that could seat over 800.

In the mid-thirties you could take a break from the Great Depression and spend hours in the theater. In January 1934 at a visit to the Madison Theater you could choose between 40 cent Orchestra seats or 25 cent Balcony seats and then watch the news reel, a Rin-Tin-Tin short, Duck Soup, and Orient Express. A great day at the movies in a theater that was decorated with marble and frescoes, the stage adorned with white pillars, with beautiful painted and bronze plates surrounding a circular dome in the ceiling, painted sky-blue and filled with stars.

During World War II the theater hosted free concerts for the soldiers.

In the seventies the economics of a single screen theater became more and more difficult. A run of flops could wipe you out. So by the eighties the Madison Theater was split in three. The balcony became the two theaters you may remember having the steep stairs. The Orchestra became a theater at the back.

In 1986 it looked like Madison would lose the theater and over 300 residents signed a petition to try to save it and turn it into a non-profit organization. Before that could happen however a buyer stepped in and reopened the theater. To the delight of Madison residents the movies were back.

In the nineties, the back screen, what was formally the Orchestra part of the theater, was split into two screens. Now the theater was in its current configuration of four screens.

In May 2017 Madison Theater closed again, and again Madison residents rallied to save the theater. Over 2,000 residents signed the petition to save the historic building – a Madison record. Please attend the Historic Preservation Committee meetings at the Hartley Dodge Memorial Building. If we are to save the theater you will need to be part of its story.

Though we haven’t found any photos of the interior of the Madison theater, the theater pictured here was part of the Lyons Theatre Circuit and designed as an exact replica of the one built in Madison. This is what the Madison Theater once was. 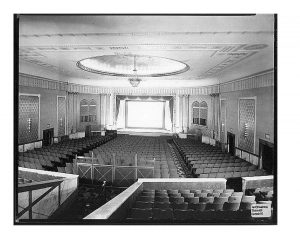